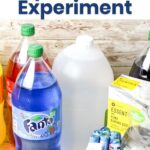 There’s nothing like an explosion to grab your kids’ attention! And the messier the better, right? This rainbow pop and Mentos experiment is a classic with a twist! It’s a colorful version of the familiar soda pop and mint candy blowout, and it’s tons of fun.

What’s the science behind this experiment?

Well, contrary to what you might think, this isn’t actually chemistry, but rather just physics!

The “explosion” of soda pop is caused by a rapid release of the pressurized carbon dioxide in the liquid. Carbon dioxide is what causes the “fizzy” taste of the soda pop, and it’s naturally released as you open the bottle or pour it into a glass — just slowly. But we can speed that release up by breaking the tension that holds the gas suspended in the liquid. (That’s why if you shake or drop a bottle of pop, it may “explode” when you open it!)

This pop and mint candy experiment is one of the coolest and easiest to do. But there are tons of fascinating experiments you can do with your kids in your own kitchen. Grab one of our recommended kitchen science books and start experimenting! We’d love to see what you do, so post in the comments too!

Kitchen Science Lab for Kids: 52 Family Friendly Experiments from Around the House

The 101 Coolest Simple Science Experiments: Awesome Things To Do With Your Parents, Babysitters and Other Adults

So what do the candies do in our mint candy and pop experiment? Well, despite what they look like, Mentos aren’t actually smooth candies. If you look really close, they’re covered in tiny bumps. And those bumps are just enough to disrupt the carbon dioxide gas bonds in the liquid. That means… sploosh! The gas releases at all once, and with the immense pressure, shoots the liquid out of the bottle in a great big spurt!

For this experiment, you’ll want a large outdoor space, as it can get quite messy. You may also want a video camera or your smart phone to record the experiment, because it looks amazing!

To get the rainbow effect, use multiple colors of Fanta soda pop. For the “explosive” effect, you’ll need Mentos brand mint candy, of course. And for even more fun, we included baking soda and vinegar, and some dishwashing liquid, to maximize the mess!

You’ll also want a plastic surface of some kind to hold all your bottles. We used an upside-down laundry basket, but a plastic sheet on a small table would work too. And we used cups to help control the explosion, so you’ll need 2 plastic cups for each color. Remember, this rainbow pop and Mentos experiment is MESSY!

For this version of the pop and Mentos experiment, first prepare your cups. Put a package of Mentos candy in each cup, with one cup per color of soda pop you have. Then add in the baking soda. In a separate cup, mix one color of Fanta, vinegar and dishwashing liquid. We added matching food coloring, as well, just to enhance the color of the result. Do NOT drink this!!

When you have your camera ready, add the candy-and-baking soda mix to the Fanta mix. If you can do it quickly, you can see the simultaneous reaction happen all at once. Then step back fast and watch your rainbow pop and Mentos experiment in action! It’s lots of fun!

You may want to buy lots of candy so you can do this rainbow pop and Mentos experiment over and over again. Your kids will love it!

You should see a shooting spray of bubbly, colored liquid come from each cup. It’s like a messy, liquid version of fireworks!

Try experimenting with different amounts of baking soda, vinegar, dishwashing soap, pop and Mentos. What changes? Compare the reactions. Which ingredient do you think makes the biggest difference?

Have fun with this rainbow pop and Mentos science experiment!