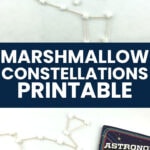 If you’re looking for fun space activities for kids, what better way than with a hands-on activity? This is not only going to help them learn about the constellations but they’ll be able to build them which is super awesome for memory skills, too.

Who knew that a few marshmallows and toothpicks could create hours of learning fun? I love being able to use items around the house for the kids to learn!

This fun printable is a great way to explore outer space with kids. Not only will they be able to get outside and look up at the night sky but they’ll also be able to do this fun activity by themselves, too.

If you are going to take the kids outside to peek at all the various constellations, be certain that you pack binoculars, a telescope, or just let the kids use their eyes to see what they can see naturally.

As long as they’re engaging and acting interested in this topic, do everything that you can to increase their excitement and learning.

Ways to encourage creativity in kids

I’ve found that the easiest way to get the kids to want to get excited about something is to make it be all about hands-on learning. And to do this, you have to be willing to combine a lot of learning power.

We love to use books in our learning whenever we can but we also like to use resources for creativity as well. This is where this fun astronomy activity comes into play!

I actually thought that we’d run out of marshmallows quickly because they’d be eating them but they shocked me! They were saving as many marshmallows as possible because they were using them to build!

Anytime you can have the kids use their minds and hands, awesome things are going to happen.

Gather up the short list of supplies needed to make this constellations.

Once you have all your supplies gathered up, it’s time for the kids to get started. Divy out the supplies so that everyone has plenty to create with.

Using toothpicks and marshmallows, create constellations from the book. In this project, we created the following constellations: Ursa Major, Ursa Minor, Cassiopeia, and Canis Major.

Tips for making constellations out of marshmallows

As you can see from the images below, it’s not overly hard to make constellations using marshmallows but there are a few things to keep in mind!

Make certain that the kids don’t lick their fingers and then touch the marshmallows. This is going to create a giant sticky mess that will do nothing but frustrate the kids. As long as they can keep their hands clean, they shouldnt’ have any issues.

I’d also suggest having extra marshmallows on hand for this experiment. There will be some that will be eaten, dropped, lost, smushed, get wet, get thrown, or a combination of all the above.

As you can see, there is a lot of putting together toothpicks and marshmallows for this activity. This has a lot of benefits to it for little hands to also work on fine motor skills as well.

Encourage the kids to try and build these on their own, following the directions in the book. They’ll be amazed that they have the capability to create something as cool as this with just two simple supplies.

Astronomy for Kids: How to Explore Outer Space with Binoculars, a Telescope, or Just Your Eyes!

Once they get the hang of how to make the constellations above, they can then move on to trying out shapes as well.

Be certain to check out our Printable Constellation Lacing Cards as well!

This is a fun way to challenge their creative skills and see what they can make! They might be able to create the night sky full of constellations with just a little bit of effort and trying!

Once the kids get the hang of this fun activity, you just might have to see what else they can create for what they see in the night sky. Will they be able to create stars or other fun shapes such as that?

The other fun way that you can use this activity is to teach them how to spell the names of the constellations, too. This is great for kids who love science and who are looking for fun ways to grow their knowledge.

If you love this Marshmallow Constellations Printable, be certain to check out these other fun science learning activities as well! They’ll really love being able to use their hands and mind to create!

Visit the other bloggers in the Homeschooling Fun through the Summer series to see each of their 10 day series.