If you’re ever in Ontario, you have to visit Toronto. We’re not a fan of the large city, but it does have a lot of kids’ attractions that our kids enjoy. So we brave the traffic and squirm for parking spaces so our kids can have fun in the city. 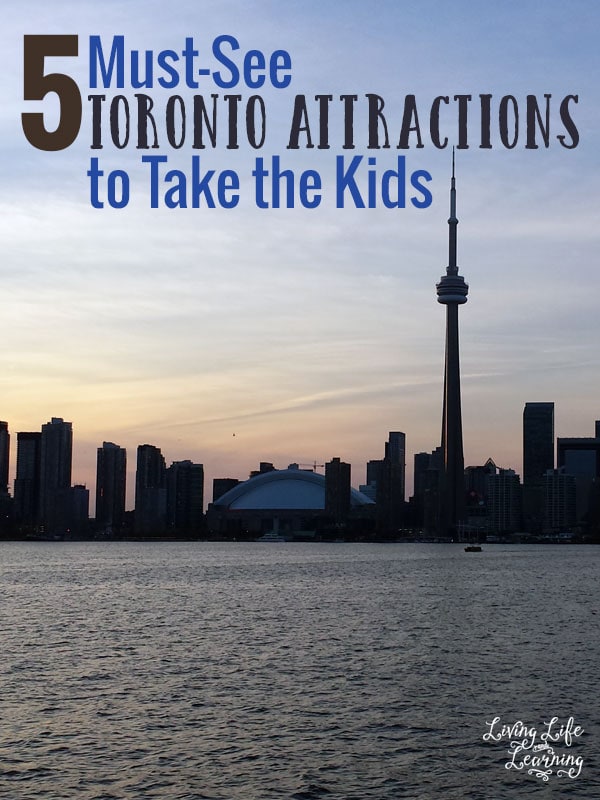 If you’re thinking of staying longer than a day trip, the Trump Hotel would be a great place to stay. They spoil your family with popcorn movie nights on the Play Station 3, they include several video games and movies to choose from, a huge swimming pool, comfortable robes, slippers and wonderful customer service.

As soon as you enter the lobby, you can see the amazing blossom theme they have going through out the decor of the hotel. They also have a spa, The America restaurant and The Calvin Bar right in the hotel. If you need to get a workout, you get a wonderful view of the city through it’s large floor to ceiling windows.

We took the subway and headed to the Royal Ontario Museum to get our dose of history, dinosaurs and science. We spent the majority of our time in the Animal exhibit where they had a large number of hands-on kids’ activities. My son enjoys the bat cave while my daughter loves using the magnifying glass in the interactive display the have so she can explore. My oldest loves everything in there but finds it hard to wait for everyone to catch up to him.

He’s a huge fan of the rocks and mineral exhibit, we enjoy looking at the gold specimens they have. My son has remarked that a some of the gems he’s heard about from Minecraft already.

In the kids’ area beside the fossil dig, my son found the display of costumes and dressed up like a Roman soldier, my daughter put on a Kimono but was disappointed that it was too large.

You really have to bring your walking shoes and a stroller for little ones who easily get tired. There’s so much to see here.

The Ontario Science Center is a great way to spend the day. The new Circus exhibit was really for my kids. They had tight rope walking for them but my kids’ hate heights so they didn’t want to go up. In the center of the exhibit, you can go in and there a large number of costumers from animals like lions, bears to princess and other circus performers. My daughter was the only one interested in going in because my boys are beyond the dress up phase but she really enjoyed it. It could be because she enjoys having pictures taken of her.

My kids’ enjoyed firing the cannons, well with balls, at the targets, you have to reload them, and it got so popular that they had a line up behind them. They took their turns and actually returned to the same exhibit multiple times. My son thought he poop exhibit was hilarious, it looked so real. You had to guess which animals the dung belonged to, his kind of exhibit.

For the ocean animal lovers, you have to visit the Aquarium, it’s a great way to get up close and personal with the sharks. My son, who is a huge animal lover, is in love with this place. The place is dark to mimic the environment so keep your little one’s close, it can get really hard keeping track of three kids who’ve wondered off in three different directions in that lighting.

This is my younger son’s favorite place and it’s geared towards him as well. While both of my boys love Lego, the playground has a height limit that my oldest has passed eons ago. I don’t let me daughter go in because it can get a little rough with all the kids running through.

She prefers to stay outside in the Lego house and play with the baking Lego set in the kitchen.