Travelling to Toronto on a weekday afternoon was quite the nightmare I expected. Navigating through downtown Toronto was the dreadful experience I expected. Taking 2 hours to find parking?…was not in my plans!!!  We found a parking lot close to the ROM, the same city-owned lot we used the last time we visited the ROM. Our problem this time is that we have a roof mounted cargo carrier.  There was a height restriction reinforced by a metal beams that my husband had to stand outside of the car for a good 15 minutes guesstimating if we could get under. Everybody coming out of the parking lot gave him the “nah you won’t make it” head shake. We ended holding up what seemed like the whole city behind us and then creating a dominoe effect of everybody backing up so we could get out,  going forward was not an option.

Nearly 3 hours behind schedule we made it to the ROM. You’ll know its the ROM because in contrast with all the high-rises and fancy department store in the area the ROM is one of the most beautiful and unique building in Toronto.  The ROM is located at the South West corner of Bloor and University.  Queens Park, Hospital for Sick Kids, and the University of Toronto are some of its neighbors. The ROM is easily accessed by public transportation. We exited onto Spadina Avenue from the Gardiner Expressway, drove through Chinatown and the University of Toronto to the ROM. 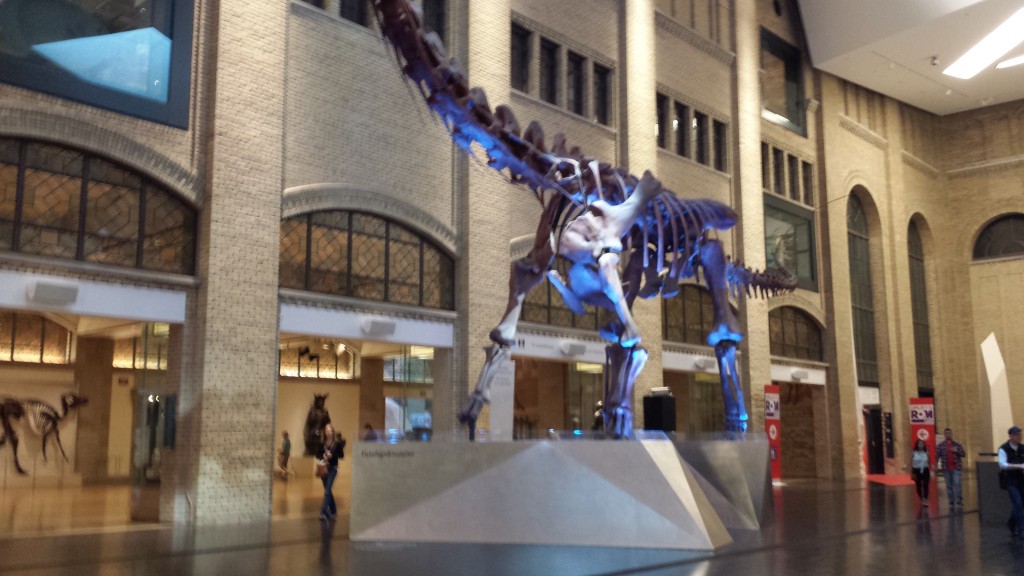 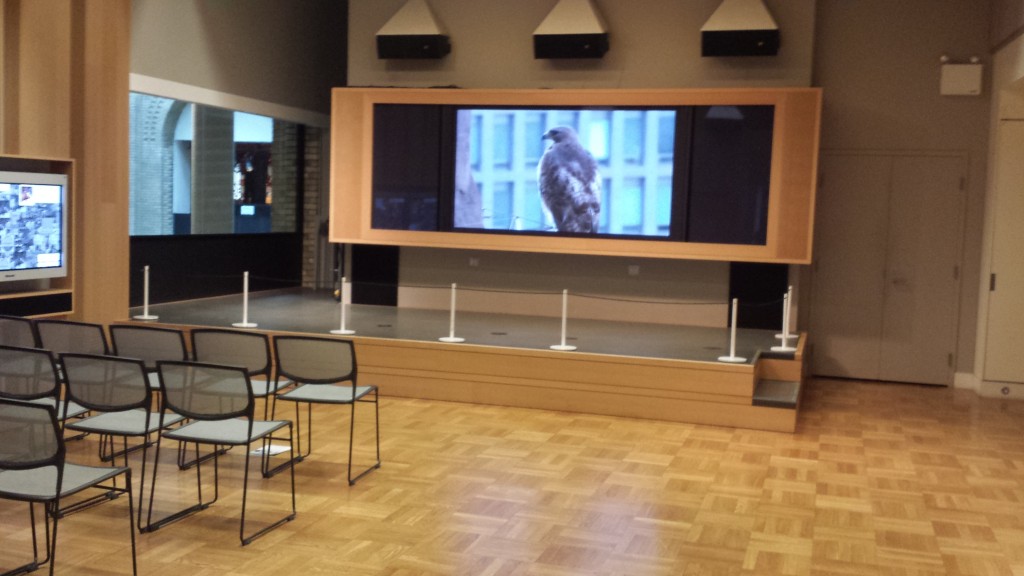 A documentary on city dwelling birds 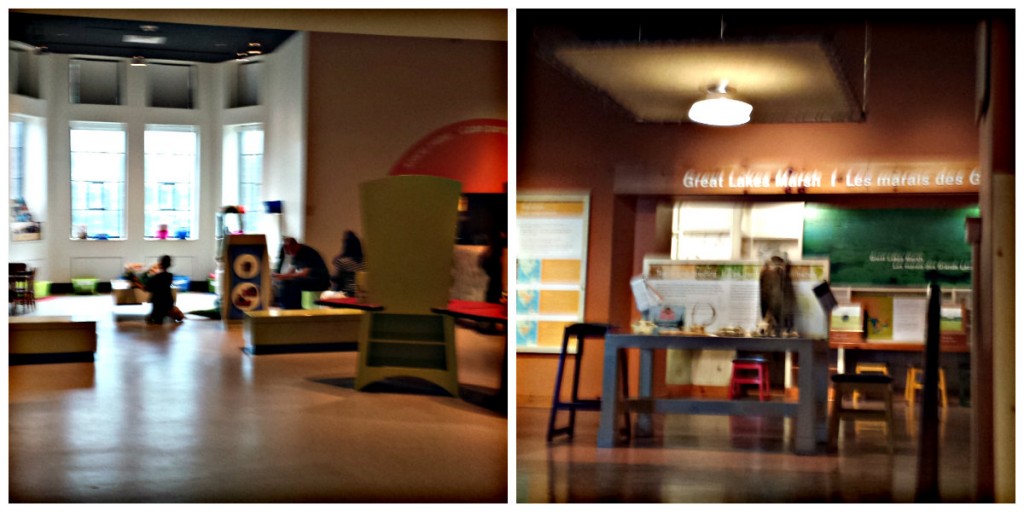 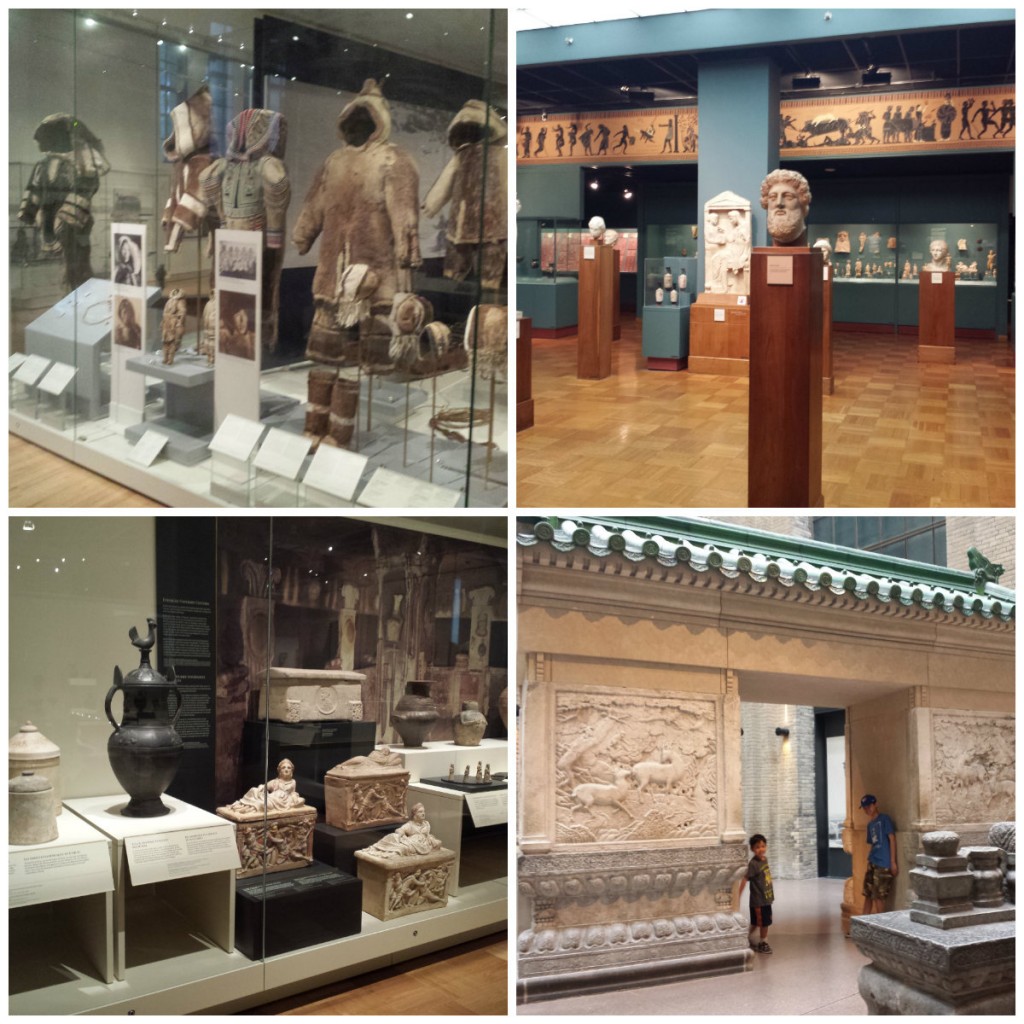 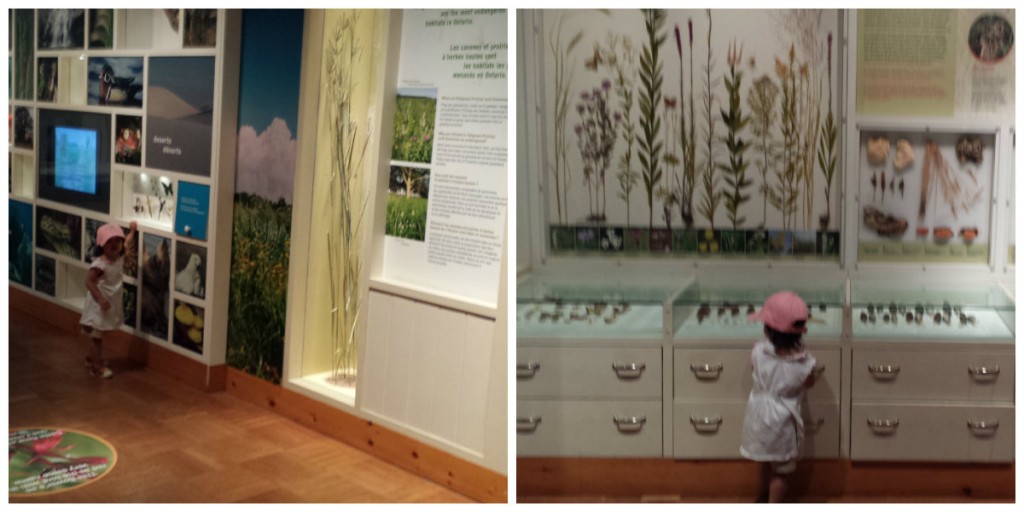 Hands on and informative displays throughout the ROM. Lots of reading and learning for those inquisitive little minds. There are a lot of little drawers that were the perfect height for my toddler to pull out and explore.

Dinosaur exhibits, always the kids’ favorite. The ROM has one of the most extensive dinosaur exhibits that we’ve been to.  If your kids are fascinated with dinosaur  then the ROM is the perfect place  for them. 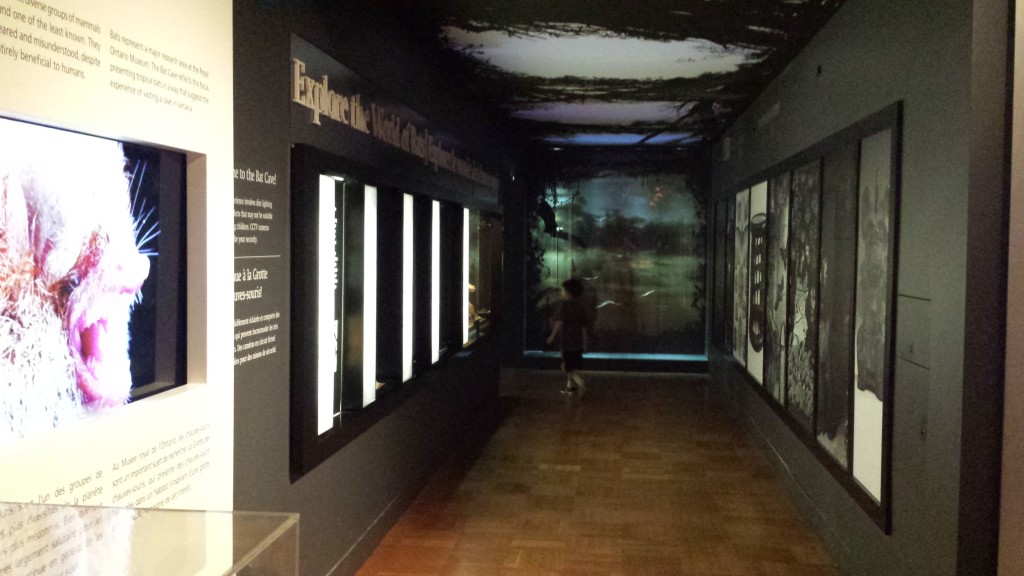 Another one of the kids’ favorite the” Bat Cave” exhibit. You won’t see Batman in here but you will get an interactive lesson on bat lives and see some cool bat habitats. 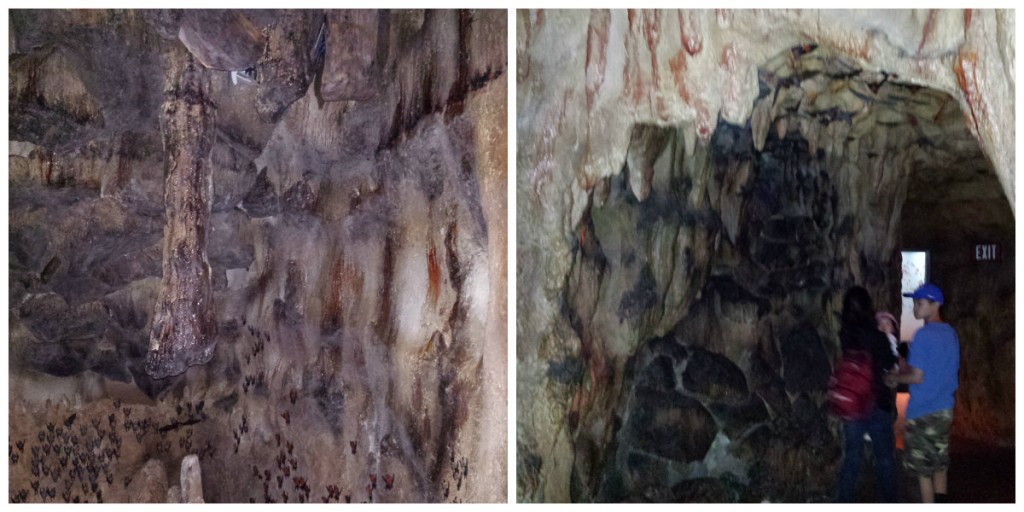 Inside the bat cave 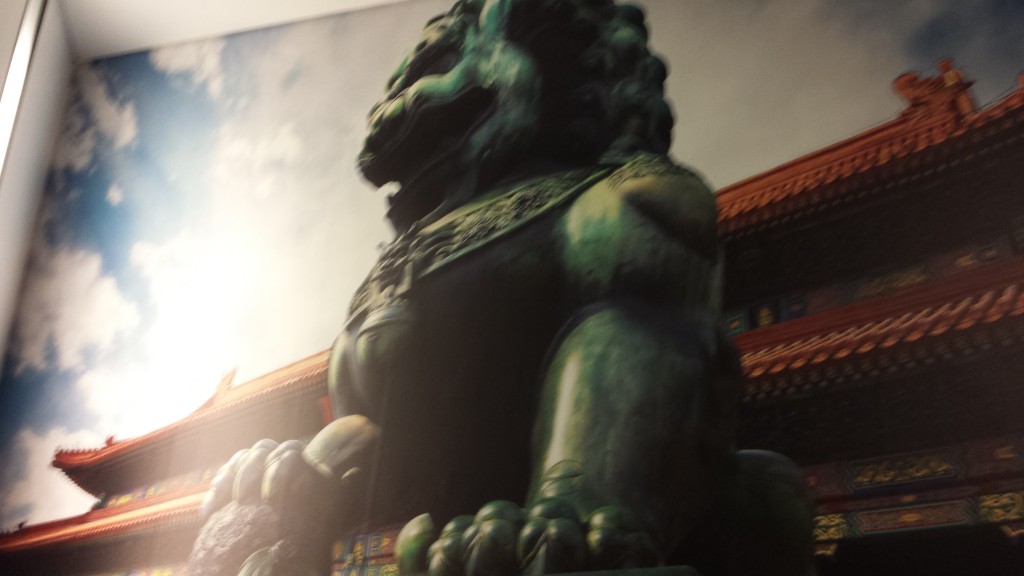 The special exhibit at the ROM as of June 7, 2014 is the Forbidden City “inside the court of China’s emperor”.  An awesome and breathtaking  experience. Unfortunately cameras were’t allowed but it was truly an amazing opportunity to see all the priceless artifacts and learn about the history of ancient China.

We lost a good 2 hours just finding parking so we only had 2 hours before closing to see the ROM. Unfortunately we had to rush to be able to do see everything . It is regrettable that I didn’t have more time to soak in all the amazing exhibits especially the Forbidden City exhibit.  The Forbidden City exhibit alone is well worth the price of admission. We loved the ROM spacious atmosphere.  Its not clustered like most other places. It was busy but you had plenty of room and plenty of things to explore.  The ROM had something for people of all ages. For all the history buffs the ROM provides and abundant of reading material on many great ancient civilizations. For dinosaurs lovers, the ROM has a a wonderful collection waiting for you. 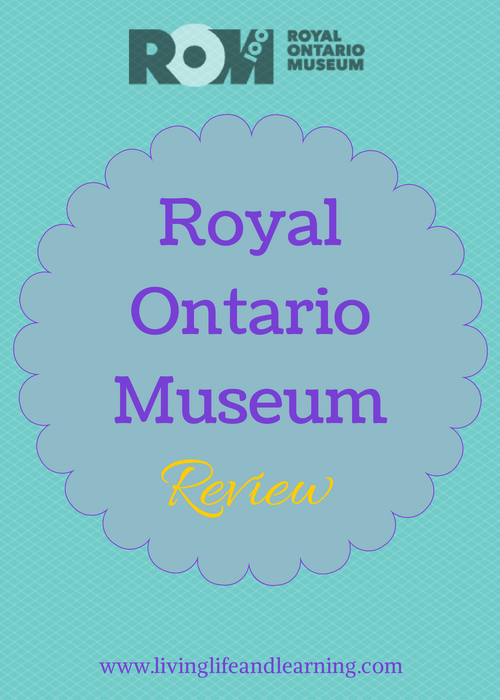 This was right in line with our study of ancient history and our curriculum. It’s great to see my son’s eyes light up as he recognize the time period that the exhibits were from. He was really excited to see the Greek, Rome and Egypt exhibits. They also had a whole wing for China and Japan plus the Forbidden City exhibit. There are a few nude male statues in the Greek exhibit that my boys found hilarious to see. My sons are particularly interested in their clothing, weapons and money of that time period.

I know many homeschooling parents I’ve spoken to don’t like the commute to Toronto and rather find field trips for their homeschooling children closer to home. Our commute was terrible and finding parking was truly a dreadful experience but being able to let my children experience the ROM was spectacular.  Its one thing to read to your children about Ancient China or dinosaurs that once roamed the earth, its is another level (a very cool and awesome level)  to have your children see all these wonderful things they’ve been reading about in person.    We are planning to go back soon but this time  without  a cargo carrier. 🙂

Disclaimer: I received free tickets for my family and I in exchange for my honest review. I was not required to write a positive review, nor was I compensated in any other way. All opinions  I have expressed are my own or those of my family. I am disclosing this in accordance with the FTC regulations.