Skip to content
17 shares
LegoLand is located in the city of Vaughn, Ontario.  Its is situated within Vaughn Mills Mall seconds away from the Rutherford exit of Highway 400.  Stay away from highway 400 during rush hour  especially on Fridays. We visited LegoLand on a Sunday afternoon.  Although it was busy we easily found parking in the mall’s complex. LegoLand has a store front for mall patrons and LegoLand Discover Center is in the back.   The place doesn’t look too big from the onset but as soon as you enter the Discover Center it quite spacious.  LegoLand has 2 amusment type rides, a very cool playground, a 4D theater, countless Lego exibits, countless build stations, party rooms, and eating areas. 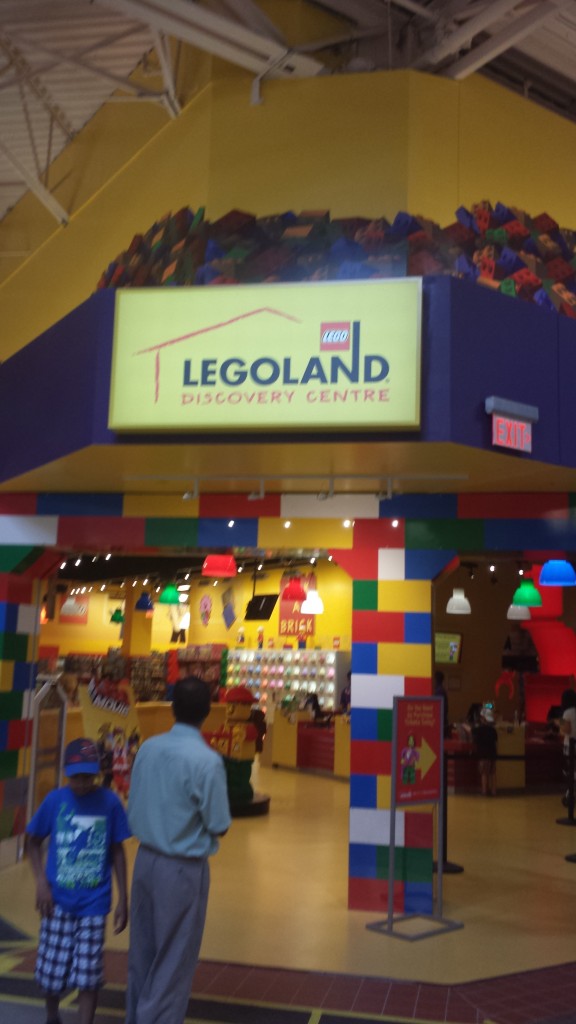 Toronto’s skyline with lighting effects and the Rogers Center in Miniland. 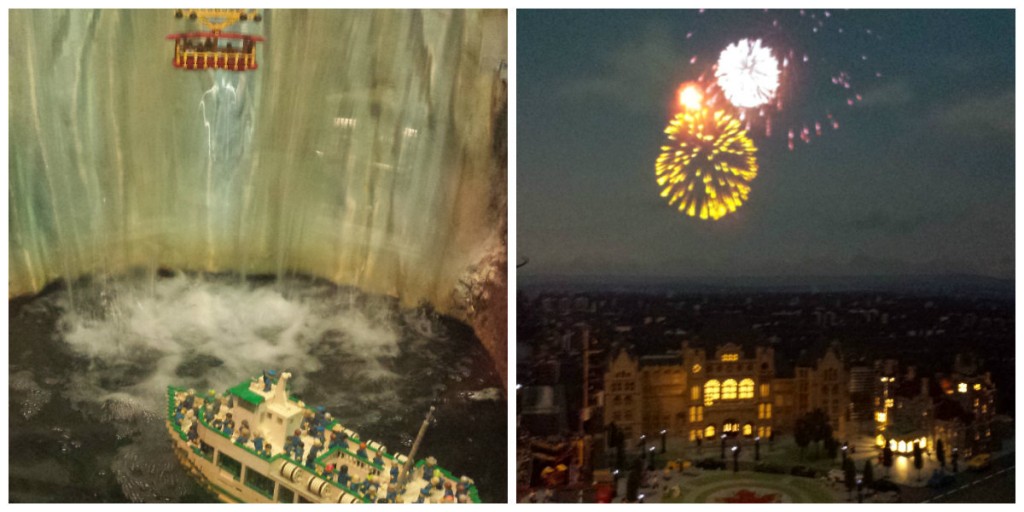 Niagara falls and Toronto with “fireworks” 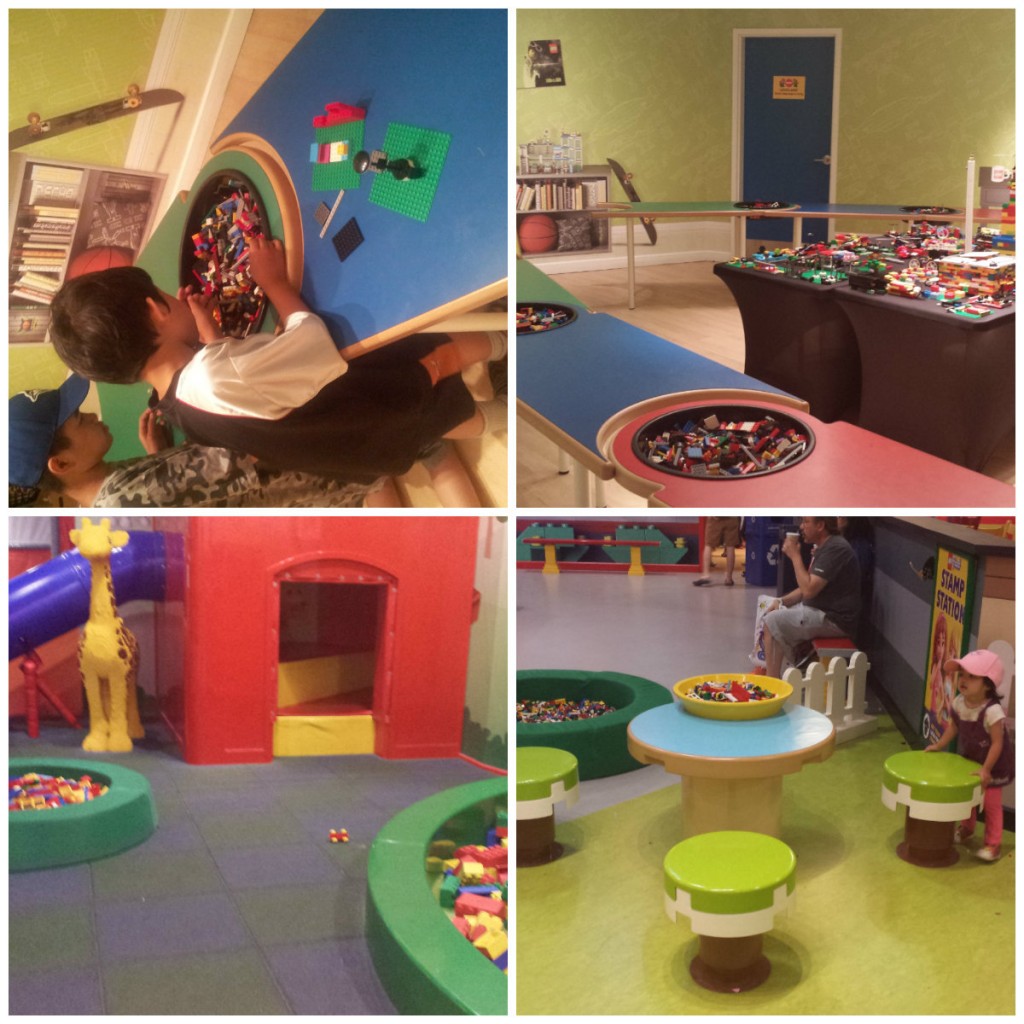 Many build stations where your little ones can let their imagination run wild. 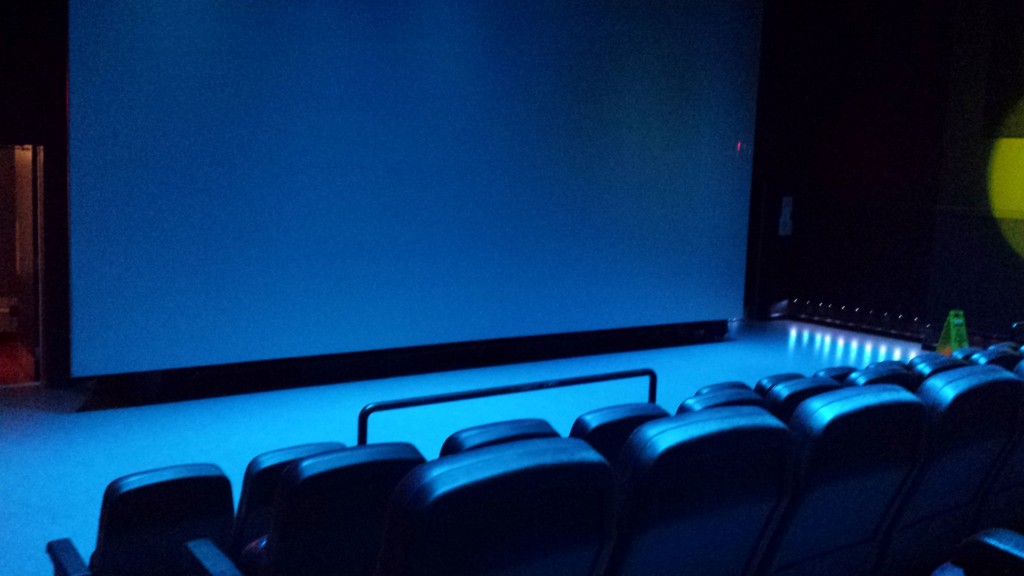 This is the cinema. A 12 minutes 4D movie plays through out the day. Quite possibly the coolest theater we have ever experienced.  When we walked in I noticed the seats had splashes on them so we went to the back. The movie introduces you to the Lego land of Chima. When you fly through the waterfall you get sprayed with a mist of water from above, hence the damp seats. They boys really like it. 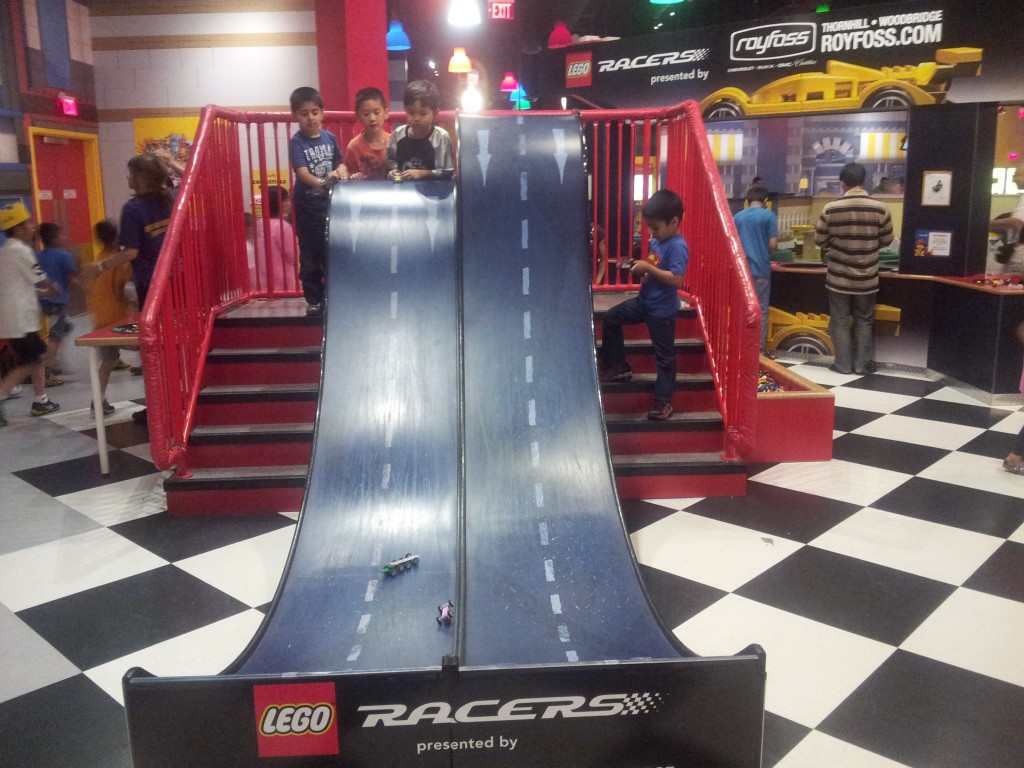 One of 2 racetracks where kids can build their own Lego race cars.  Naturally my boys and most others boys gravitated towards this area and they were hesitant to do anything else. 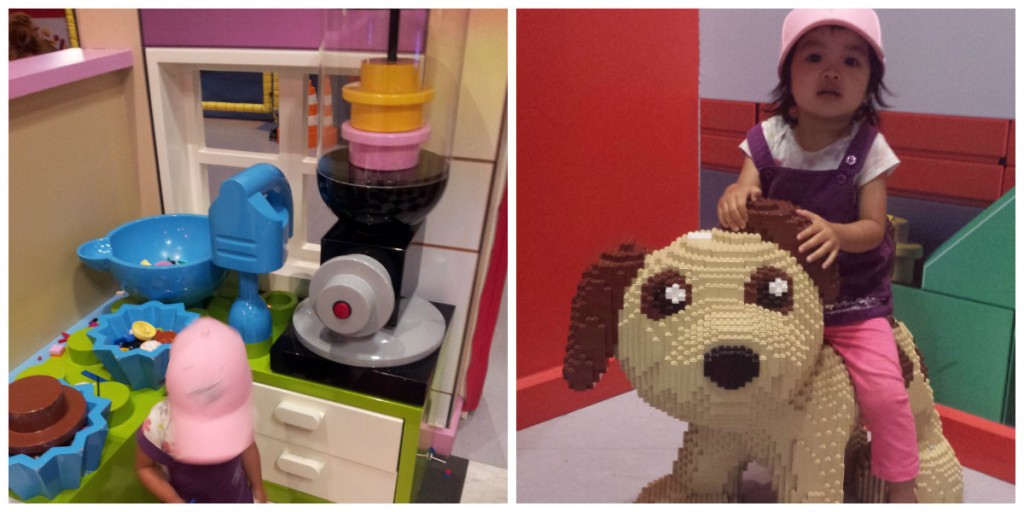 While the boys were spending most of their time building and racing their cars, my daughter and I had fun in the Lego house area where there was Lego house with living area and kitchen. 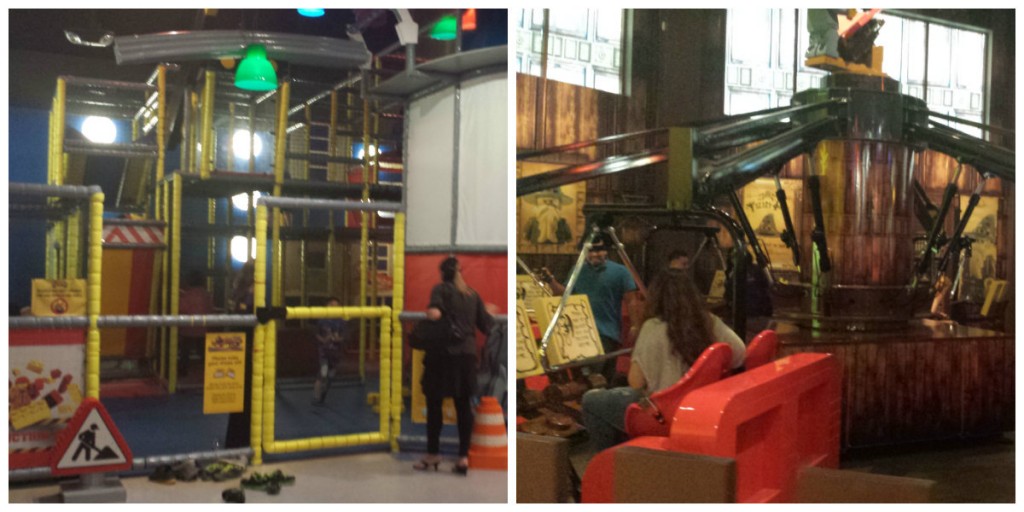 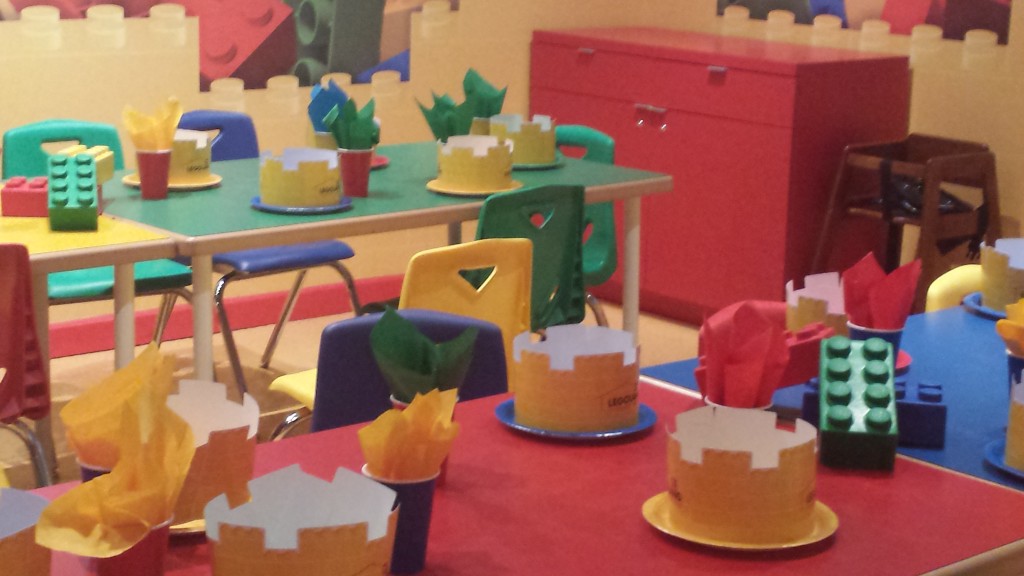 Birthday room. There were a couple of Birthday parties when we were here.  I would definitely have my kids’ birthday party here if I lived in Toronto. But Luckily I don’t so hopefully Lego will build a Discovery Center in my neck of the woods. 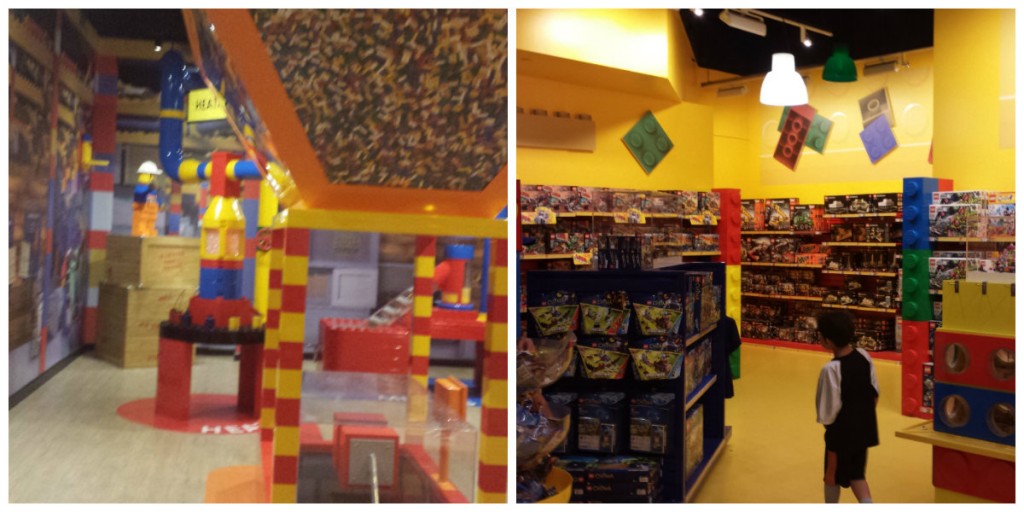 We spent 3 hours at LegoLand.  We left at closing time on the dot. The boys could have have easily stayed and play for another 2 hours.  As previously mentioned there are 2 race tracks that are in the middle of LegoLand. The racetracks are clearly the most popular area with the boys. I had a really difficult time getting my boys to do anything else. Even when we got our boys to go do something else they always ended up back at the racetracks. 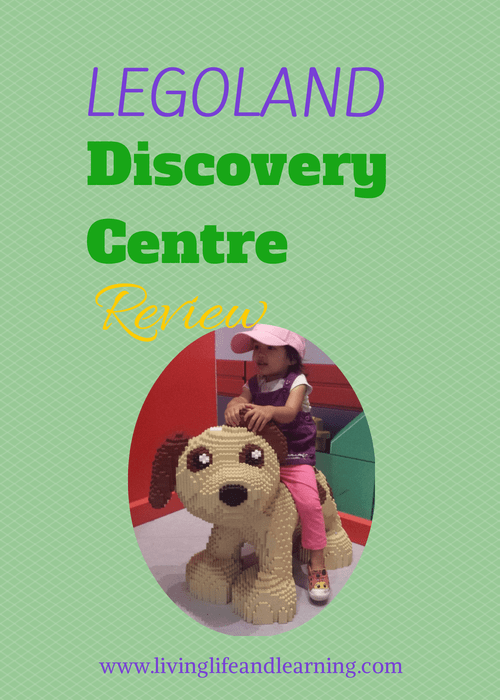 As one would expect on the Weekend there would be plenty of birthday parties going on.  This would be an awesome place to host your kids’ birthday party. I had my children’s birthday parties at many places, most only have a playground and video game machines,  by contrast LegoLand has playgrounds, rides, cinema and so much more. LegoLand delivers significantly more value.

LegoLand will definitely be part of our stopover as part of our yearly camping pilgrimage to Algonquin Provincial Park.   As all parents would know how pricey Legos can be.  I am always careful not to vacuum Legos parts. It was great to let my kids play with all the Legos they want and not worry about missing Lego blocks thereafter.   If you have Lego-loving kids then LegoLand is the place to be. You can just sit back and relax while your children build.  Or you can let your hubby watch the kids while you go shopping.  🙂 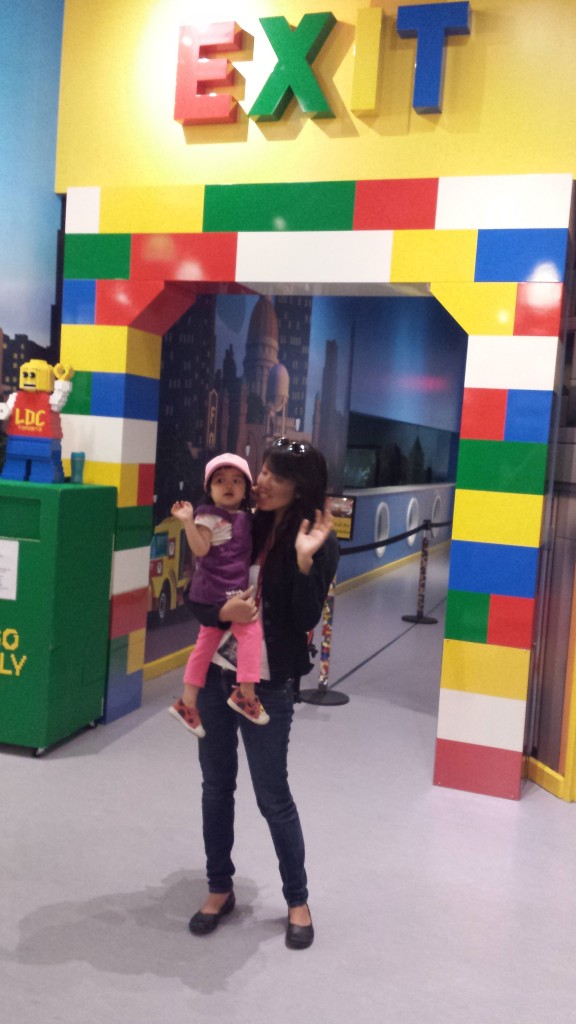 Disclaimer: I received free tickets for my family and I in exchange for my honest review. I was not required to write a positive review, nor was I compensated in any other way. All opinions  I have expressed are my own or those of my family. I am disclosing this in accordance with the FTC regulations.