You are here: Home / Homeschool Tips / Our Homeschool Journey Through the 7th Grade

23 shares
This weeks letter is J and I’ll be discussing our homeschool journey through the 7th grade. I never thought that I’d be here 6 years later still homeschooling. We thought we’d try it for a couple of months and it’s now turned into 6 years. It’s kind of awesome and scary at the same time. 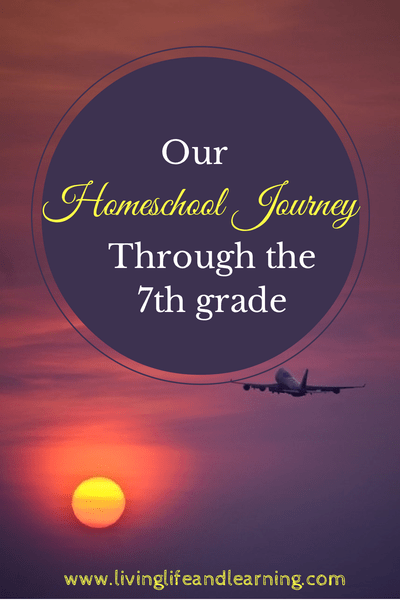 As I look back to my grand old plans from the start of the year, we have made a lot of changes. We did not stick to Saxon Math, I love Saxon but my son was just not diggin it so I put my whole hearted faith into Life of Fred, he finished Decimals and Percents and he’s still working through Pre-algebra 1 with Biology.
This freaks me out because we are not following the traditional path and a traditional textbook. Life of Fred is not well known and it’s still a new program. However, M1 is learning and he’s enjoying his work as he uses Fred so for now it’s the best thing for him.
I’m using a combination of LOF as well as TabletClass Math. I was privileged enough to review the pre-algebra course and it ended up being something that M1 likes as well.  Math has been a major struggle for M1 so I’m very pleased to have found something where he has gotten into a groove with so I don’t want to mess it up by changing things up next year.
We studied ancient history using The Story of the World, we had worked through books 2 to 4 and had to swing back and do ancients. He didn’t want to use anything else because he wanted to finish the series.
We incorporated a lot of outside reading as well as the Kingfisher History Encyclopedia for his written narrations. We found another gem from a review item that I’d like for him to use which he likes as well. He’s going to use the Veritas Press – New Testament: Greece and Rome video course and finish it out over the summer.
We did a lot of experiments this year which made science a lot of fun. I hope to continue. We went along with french and spelling with no hitches.
We worked through Essentials in Writing so next year I want to focus on writing and writing well. We’ll drop grammar and spelling and work on those things as he works on writing. This is one area that I struggle with personally so I want to make sure he’s more prepared for high school.
I cannot believe that he will be heading into high school and I’m so scared that I’ve been too relaxed in some of his work. We’re stepping away from lapbooking and working on more notebooking as well. He was not a fan of all the cutting and pasting and I had the other 2 littles I had to prep stuff for so it worked out well in the end.
Somethings that I’d like to work on are study habits and time management, this is something that I’ve mainly been doing on my own with some input from him but it’s time for him to get his school work out of the way with me nagging and guiding him through it.
We’re working on a light summer schedule so I’m hoping that will bring us back renewed and ready to hit it hard once September rolls around.
How was your homeschool year? I’d love to hear how other’s are doing.