Skip to content
13 shares
8 years ago my family visited the Seattle Aquarium and wished Toronto had an Aquarium. On October 16, 1013 the Ripley’s Aquarium of Canada opened it doors.  Costing $130+ million dollars and located in the heart of downtown Toronto at the footstep of the CN tower.   The aquarium and all its tanks holds nearly 6 million liters of water and have roughly 13,000+ specimens.  Visitor will immediately appreciate the state of the facility and warm relaxed environment to enjoy the displays and exhibits. 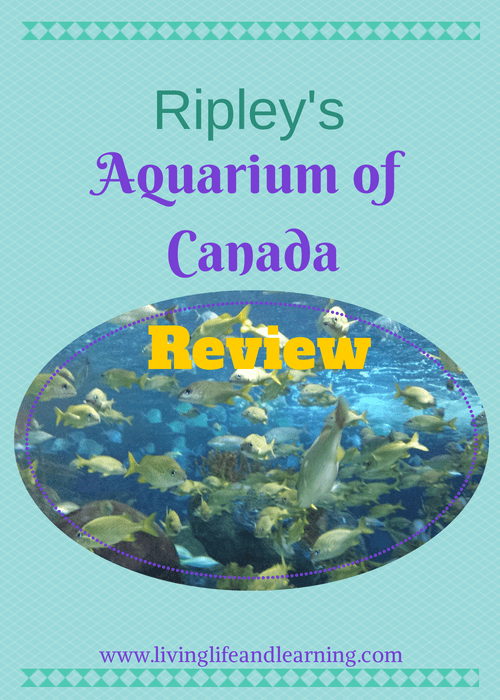 The Aquarium is located by the Spadina Avenue exit of the Gardiners Expressway.  If you have a problem finding the aquarium just look for the CN tower, it is literally next door. My family arrived to the aquarium at about 6 in the evening.   Space is a  premium in this area so finging parking can be quite a challenge. The Toronto Blue Jays were also playing a game this night and the area was bustling with sports fans,tourists and the many condo residents of the area.  We lucked out and found a parking spot along the smaller sideroads where the condominums are located. 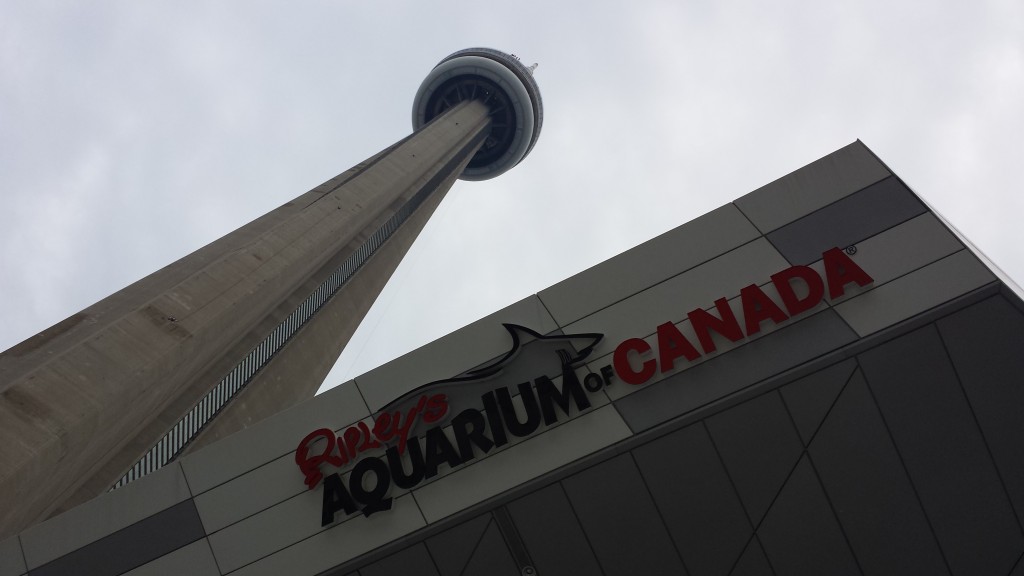 At the footstep of  Toronto’s most famous landmark. 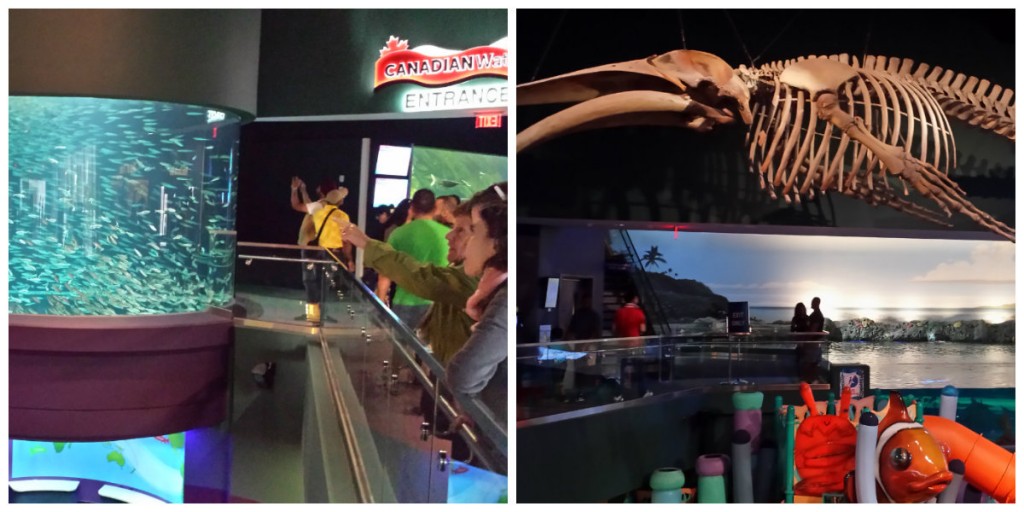 Views from the main lobby.  There were a lot of tourists and New York Yankees fans on the day of our visit. Its is safe to assume the Aquarium would be one of the top tourist destination in Toronto. 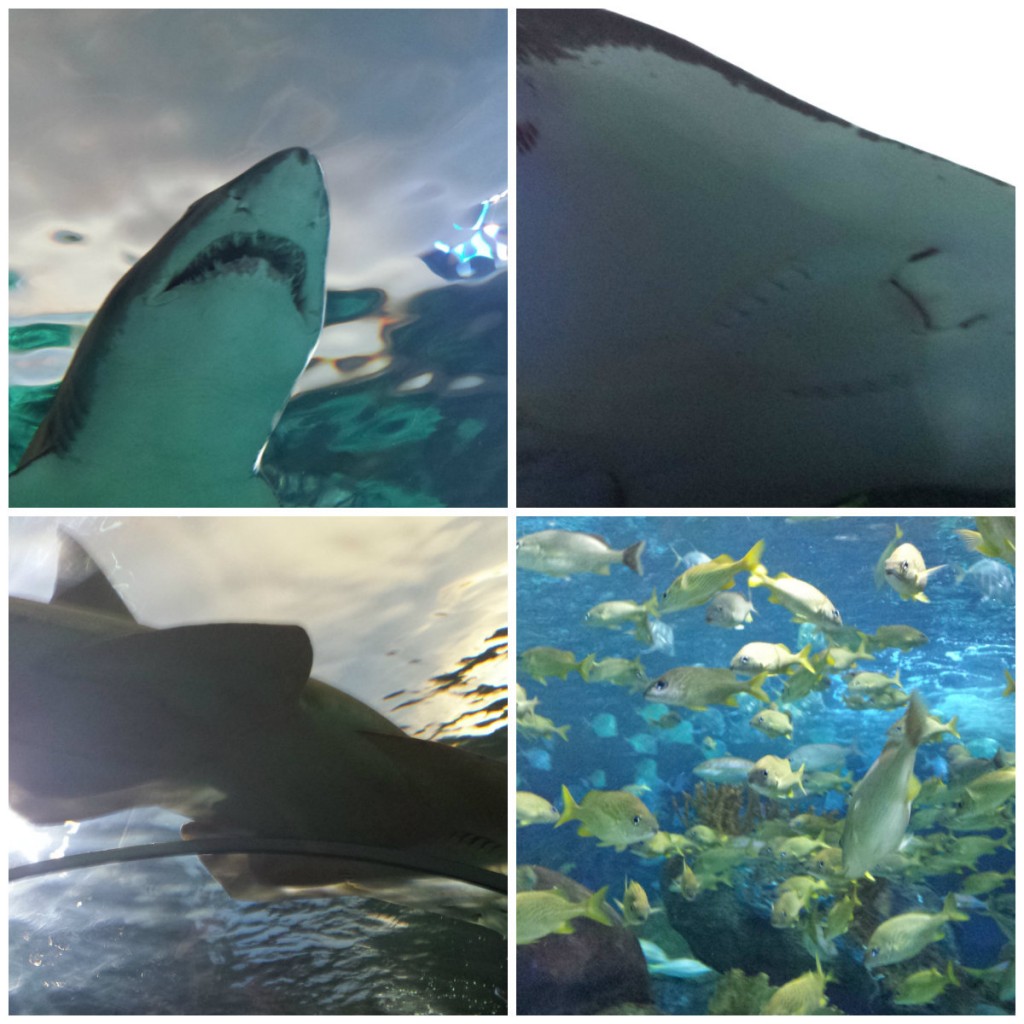 Fearsome creatures from the “Dangerous Lagoon” tunnel, which gives you an awesome view of the animals from underneath as you move along on their moving walkway. 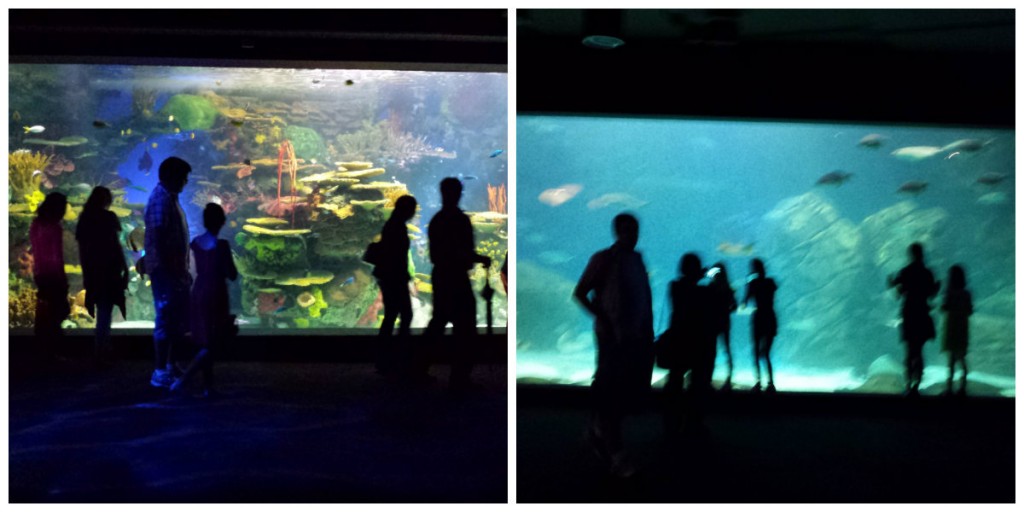 Most exhibits had seating areas where you can lay back and enjoy the mellow music and different  seas creatures. 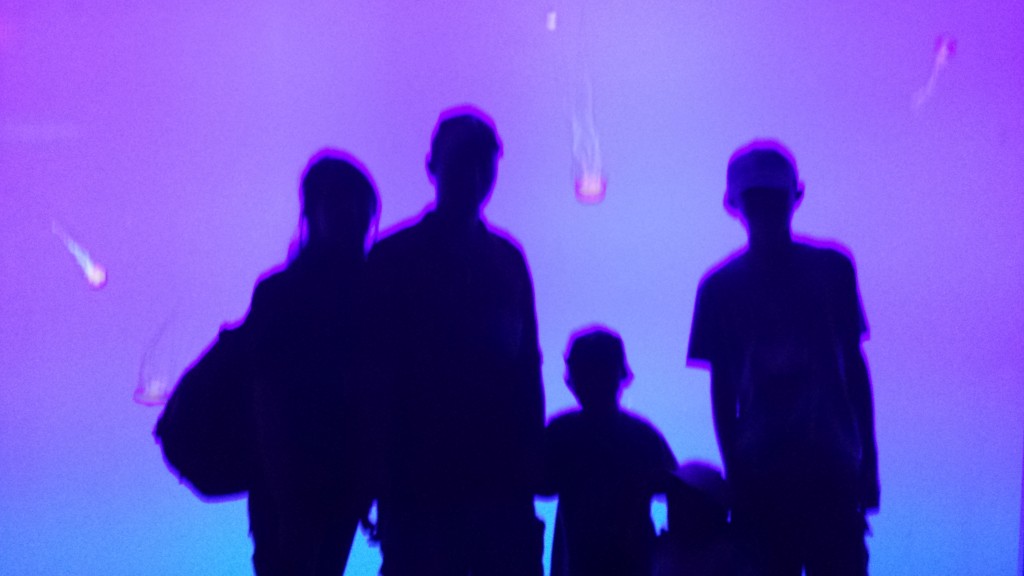 The family in front of the Jelly Fish exhibit. 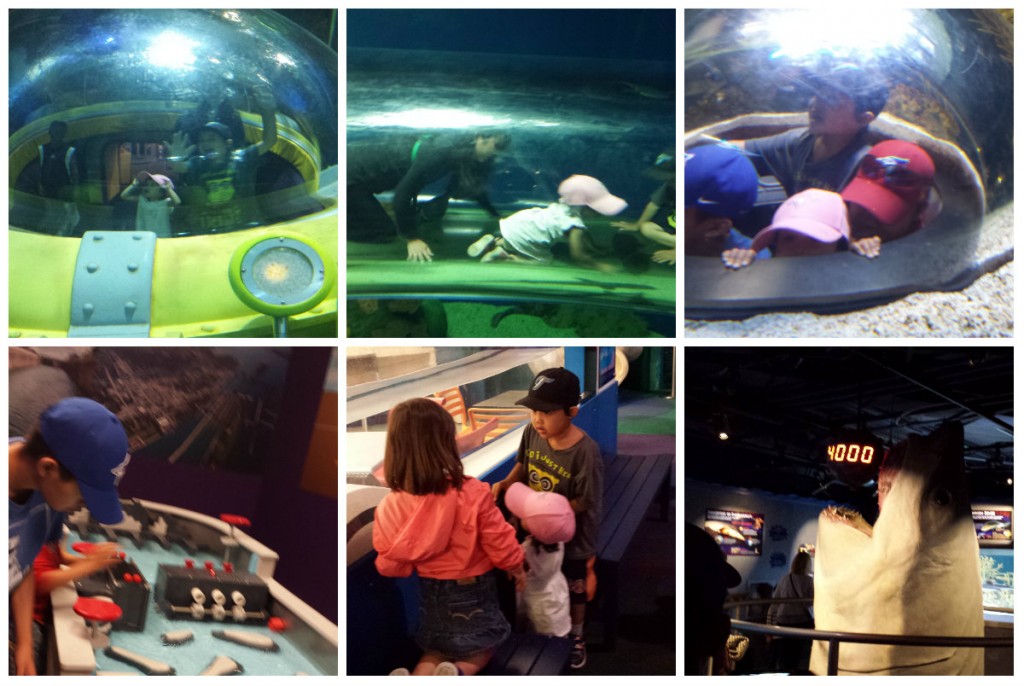 Lots of fun for the little ones. Kids will love the little crawl tunnels and subs that they can get into that are too big for adults. 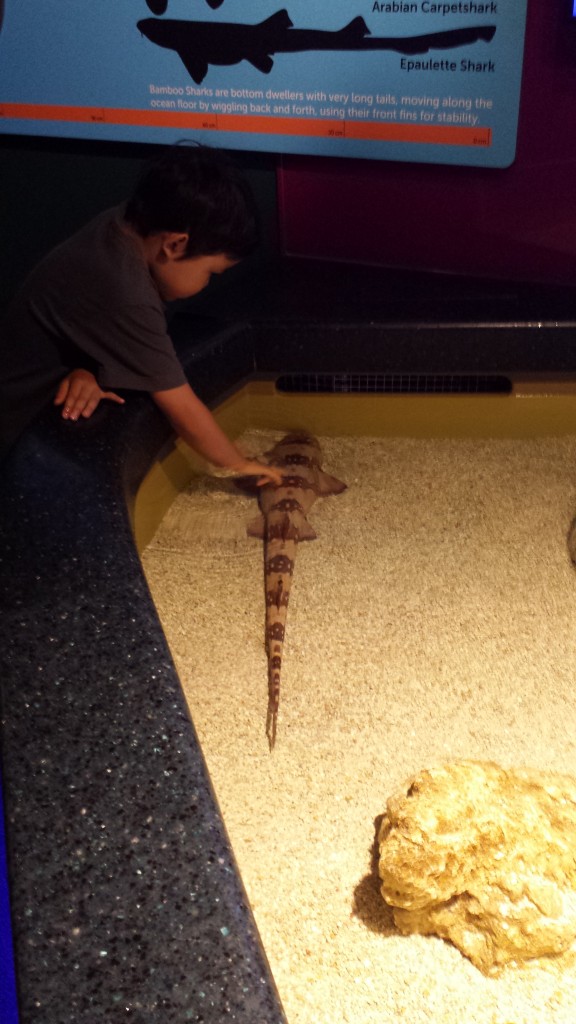 “Touch Tank” exhibits where you can get up close and personal  with some amazing sea creatures. 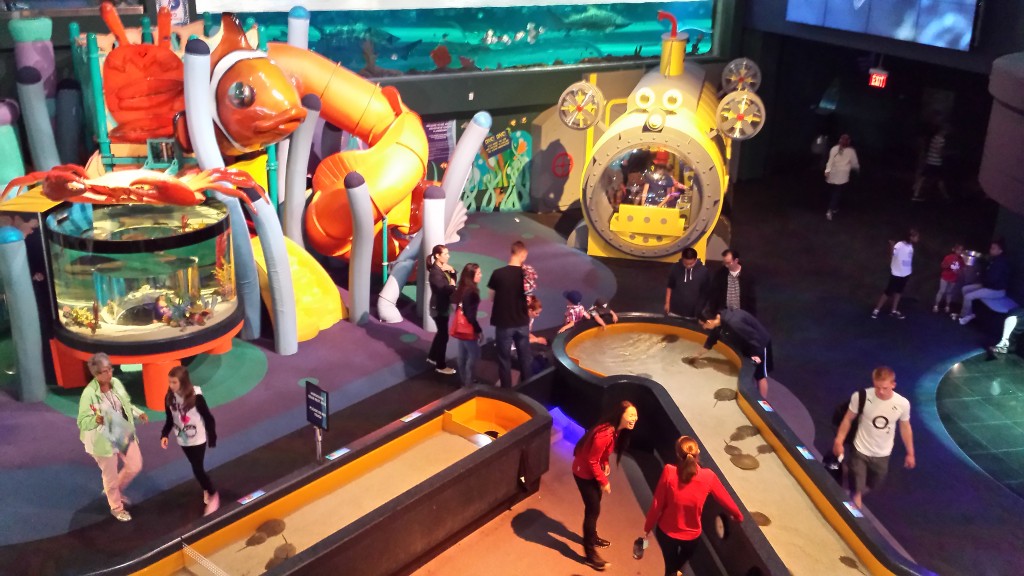 Interactive and enticing fun for kids. 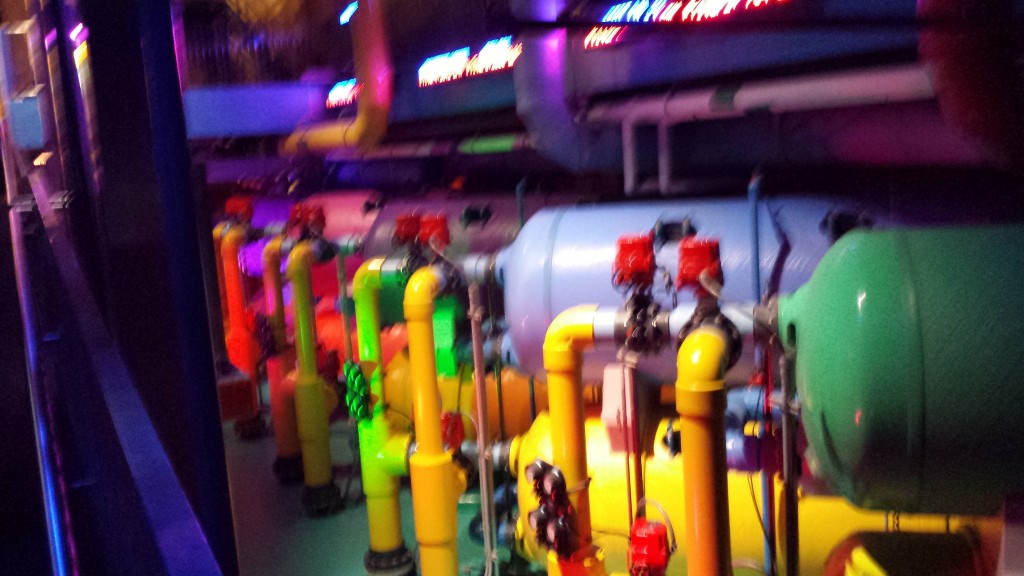 From the layout to the thousands of sea creature,   everything at the Ripley’s Aquarium of Canada is visually stunning.  We spent 3 hours at the aquarium and were able to see all the exhibits.  It was quite busy at some exibits and pedestrian traffic was quite congested at the beginning.  I found it very annoying  with people using cameras and phones’ flashes due to the low lighting of the aquarium. I had no problem taking spectacular pictures on “low light” mode with my phone.  I found that the employees were very knowledgeable. We learned that some of the bigger fishes like sharks are fed individually and the sophistication of the filtering system used by the aquarium.

If you are studying the ocean, ecosystems, habitats or animals, the aquarium is a great way to bring school alive. My youngest son loves ocean animals and he can recite random facts to you that he’s picked up through reading and watching ocean documentaries. We have a plastic ocean animal set that he loves taking into his small plastic pool outside.

There are pictures of the different sea animals in the tunnel, my son had a lot of fun trying to find them in the tank. He was also able to identify all of the sharks, his favorite animal.

Toronto now can boast of having the biggest indoor aquarium in Canada. Our trip to the aquarium was amazing and an ultimate delight because as a family we love our artificial pond in the backyard that’s home to koi fishes. Sometime we spend hours sitting in front of our pond and just stare at the fish.  Seeing the countless and colorful seas creatures that the aquarium had to offer was an unforgettable experience. Ripley’s Aquarium of Canada  will be a treat to for Canadians and tourists for decades to come.

Disclaimer: I received free tickets for my family and I in exchange for my honest review. I was not required to write a positive review, nor was I compensated in any other way. All opinions  I have expressed are my own or those of my family. I am disclosing this in accordance with the FTC regulations.
13 shares
Monique